IT Cleaning Ltd specialise in Controlled Environment Cleaning for Data Centre Cleaning Services, Data Centre Cleaning, Data Room Cleaning, Server Room Cleaning, Communication Room Cleaning, Computer Room Cleaning, Comms Room Cleaning and other IT infrastructure Cleaning. Cleaning the room and the equipment within the room. Where possible we will clean these mission critical rooms to ISO 14644-1 2015 Class 8 or better, plus all accessible surfaces free from dust (glove test). This is currently best practice for the cleaning of Data Centre’s, Data Rooms, Comms Rooms etc. After the clean we will certificate the data centre, data room, comms room to ISO 14644-3. This specification (ISO 14644) is based on the international standards for clean rooms, clean zone and controlled environments, a Data Centre / Data Room is a controlled environment (A controlled environment, also known as a critical environment, is a space with precisely regulated environmental factors. Air temperature, temperature, and humidity are regulated to meet operational needs, and the critical area is isolated from other operations within the facility). We use the best equipment and processes available including HEPA filtered Vacuums and Air Scrubbers. Air Scrubbers are HEPA Filtered to remove particulate from the air to 0.3 micron, so dust made airborne by us during cleaning is filtered out. Therefore, it can not re-contaminate the data room, equipment etc. This is essential if ISO 14644 Class 8 is to be achieved in Data Centre Cleaning, Server Room Cleaning. IT Cleaning Ltd utilise micro fibre and tacky wiping systems during Data Centre Cleaning. IT Cleaning Ltd are able to use video camera technology when data room cleaning, allowing us to get into hard to see places and remove dust safely. For further information see the bottom of this page or contact Stephen Yates 07810 893218 stephen.yates@itcleaning.co.uk

As stated above whenever possible IT Cleaning will use the following specification for data centre cleaning, server room cleaning, data room cleaning and comms room cleaning. ISO 14644-1 Class 8 or better plus all accessible surfaces to be free from dust. This specification is based on ISO 14644-1 2015 which is as stated an international standard for clean rooms, clean zones and controlled environment, data rooms are controlled environments. After the clean we will carry out validation in line with ISO 14644-3 2015 using a Solair 5100+ particulate tester. Based on these results we will then issue a certificate of conformity. These certificates are invaluable during internal and external audits. For an example of our report and certificate of conformity follow here. The Certificate is valid for one year from date of issue.

“As IT equipment shrinks in size, resulting in smaller components and less physical space between them, the risk of contamination grows. Increased heat loads per unit volume of air necessitates the need for more airflow, thus, increasing the exposure of electronics to detrimental effects of accumulated dust.” –ASHRAE TC9

“The objective of us cleaning your critical environment is to isolate and remove harmful contaminants from the subject area, reducing the overall settled and airborne particulate levels. There by minimising the chance of contamination related failures or performance issues. Our scope of works is designed to ensure we meet or exceed computer industry cleanliness standards.” Stephen Yates MD.

While submicron particle and gaseous contamination resulting from dust and dirt can lead to unexpected shutdowns of mission critical IT equipment, the connection between contamination and hardware failures is often overlooked. Dust contamination, which has been referred to as the undetected disaster and has been shown to causes 70% of breakdowns of equipment within I.T. environments.

“Contamination has been the indirect cause of more IT downtime than all the fires, floods, hurricanes, earthquakes, and disgruntled employees combined.” – Jon William Toigo, Disaster Recovery Planning, Third Edition.

The dust, which causes the problems, is extremely small. In the range of 5μm (micron) down to 0.5μm (1000um is 1 mm). Dust this small is effected by many forces including “Van Der Waals” force, in some circumstances these sub micron particles seem to defy gravity this is “Brownien Motion” in action,the dust particles interact with molecules (Hydrogen, Oxygen, etc) in the air. This dust enters your critical environment from many sources, including moving parts inside the room (ACU Belts). Or white rust, moisture can deposit salts, and minerals onto galvanised surfaces which over time forms Zinc Hydroxide, this can appear on pedestals etc, these friable white crystals, can soon become airborne. With the increasing use of economized air (free air) cooling within data centres etc. More dust is being taken into the space from outside, see below for a study on this. Depending on its properties dust may cause any number of breakdowns. I.T. Breakdowns are expensive; data centre cleaning / data room cleaning, is not, when compared.

A 2007 study by Pacific Gas and Electric, along with Lawrence Berkley National Labs, (for full study) compared particulate concentration in data centres with economizers (Free Air) cooling systems against those who introduce minimal, if any outside air. The results were as expected. Data Centres which use economizers have higher particulate concentrations in them than those who use traditional cooling systems. This suggests that whilst free air is economic, it may bring problems of its own, which should be understood prior to installation. Filtration and cleaning regime should be discussed.

IT Cleaning undertakes the cleaning of various types of computer rooms / data rooms from ISO Class 8 Clean rooms to general rooms used as server rooms / data rooms. The server rooms / data rooms, unless otherwise required, are cleaned live to reduce the interruption to your business. The frequency of server room cleaning will depend on many factors including the protocols you have in place to combat the ingress of dust. All of these can be discussed during our initial meeting. During our initial meeting we will carry out air tests using a Solair 5100+ (See: data centre cleaning standard) to show the level and size of particulates present in the rooms’ air. During the clean we will monitor the air particulate levels, we will place air scrubbers in the room to remove the dust from the air during cleaning. After the clean we will carry out a full survey based on ISO 14644-1 to Class 8 or better. We will then produce a report and certificate to show the room conforms to this specification.

Increasing technological advances in server, data storage and network technology is having an effect on the way you as an IT Professional need to operate the environment in which your infrastructure operates. Suppliers are increasingly telling you how Data Centre’s and Server Rooms should be set up with increased emphasis on HVAC protocols and the exclusion of contaminants (dust). Indeed the following Cisco, Sun and EMC now all state what the acceptable levels of contamination are for their equipment. All three hardware vendors now state that their equipment must be kept in a data centre / data room which has been decontaminated to a sufficient level on the ISO 14644-1 Clean Room and Controlled environment scale, this is Class 8 or better. The latest to do this is EMC, who in their most recent Symmetrix Planning Guide which, states their equipment must be placed in a data centre at Class 8 or better on the ISO scale. At the bottom of the page is an example of Cisco Systems hardware warranty. Note clause (c).

Dust can build up inside servers and block airways, heat sinks etc, which increase the heat produced within the server and eventually the room, therefore increasing power usage in the form of increased cooling needs both in the room and the servers (fans working harder). 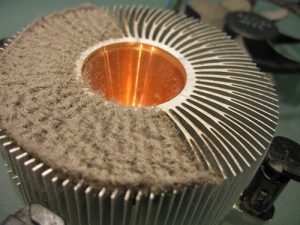 A number of sources suggest that the cleaning of server rooms should be carried out regularly. During our visit we are able to discuss and recommend frequency.

Along with Oracle, Cisco, Sun and EMC/DELL and the Data Centre Alliance; IT Cleaning have adopted a specification based on the ISO 14644-1 for clean rooms, critical environments and controlled environment cleaning. Data Centre’s, Data Rooms, Server Rooms, Comms Rooms etc are controlled environments.. This is ISO 14644-1 2015 Class 8 or better plus all accessible services free from dust. This international standard is often called a Clinical Clean or 5 Micron Clean.  IT Cleaning would be happy to discuss this specification for server room cleaning during any meeting.

You could ask your current cleaners to perform these services; or you could ask experts in the field.

The below CISCO Hardware warranty and limited warranty in the End User License Agreement (“Software warranty”) do not apply if the Software, Hardware Product or any other equipment upon which the Software is authorized by Cisco or its suppliers or licensors to be used (a) has been altered, except by Cisco or its authorized representative, (b) has not been installed, operated, repaired, or maintained in accordance with instructions supplied by Cisco, (c) has been subjected to abnormal physical or electrical stress, abnormal environmental conditions, misuse, negligence, or accident; or (d) is licensed for beta, evaluation, testing or demonstration purposes. The Software warranty also does not apply to (e) any temporary Software modules; (f) any Software not posted on Cisco’s Software Center (on Cisco.com URL where Cisco makes the Software publicly available to licensed customers); (g) any Software that Cisco expressly provides on an “AS IS” basis on Cisco’s Software Center; or (h) any Software for which Cisco does not receive a license fee. (See: Cisco warranty.) Also see Guidelines and Best Practices for the Installation and Maintenance of Data Networking Equipment Chapter 3. This discusses dust and particulate contamination within data centres and how to control this.

For a free site survey and quotation or further information please contact Stephen Yates 0870 0052581 or stephen.yates@itcleaning.co.uk

IT Cleaning Ltd can offer video survey and cleaning. This is useful for surveying spaces like ceiling voids and under floor voids especially in hard to see areas like under cabinets. This technology assists us when cleaning under cabinets, we can be much more careful using the video camera and screen to see the dust and remove it whilst avoiding cables etc. The Camera is mounted on the vacuum cleaning brush the screen is mounted so the operator can see it and any dust, he can then remove the dust safely, even in areas where it is difficult to see normally.